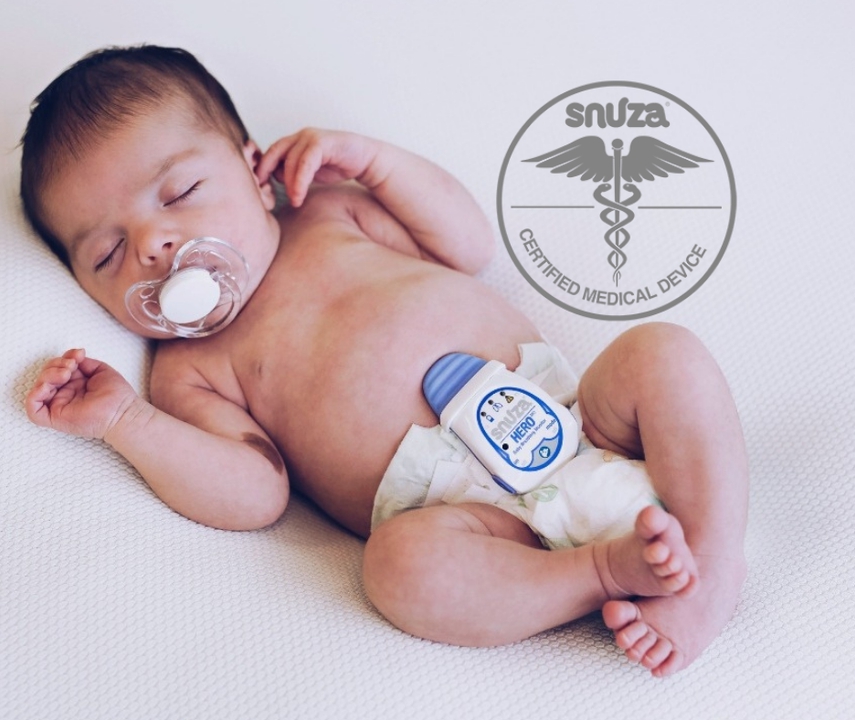 When it comes to baby monitors, but especially baby breathing monitors, detractors love to say how they aren’t recommended by medical professionals. Well, that all changed when the Snuza HeroMD received its Medical Device Certification from the European Medical Devices Directive.


What makes the Snuza HeroMD different?

The Snuza HeroMD is the world’s first medically certified wearable, portable baby breathing monitor. And it’s actually affordable, unlike many monitors used in hospitals. The Snuza HeroMD is just what you need to help provide you the opportunity to intervene quickly, should baby stop breathing.


How did the Snuza HeroMD get Medical Certification?

After producing a few portable, wearable baby movement monitors, Snuza set out to get their flagship model — and the company — up to standard to get medically certified. In order to do so, Snuza had to be able to prove to the European regulatory body that their production, manufacturing, and testing procedures were of a high enough standard.


They had to prove that the HeroMD detected even the slightest breath, making it a true breathing or apnea monitor, rather than just a movement monitor.


Why is medical certification such a big deal?

There is a narrative among media and even medical professionals that most baby movement monitors have no medical benefit. With this medical certification from a highly stringent regulatory board, we prove this wrong.


At Snuza, we aim to provide parents and caregivers with time. Time is often the difference between being able to resuscitate a baby who has stopped breathing, or prevent brain damage, and not being able to do anything.


Look at it this way: if you are alerted at 20 seconds that your baby has stopped breathing, wouldn’t that be preferable to discovering it hours later when you wake up?


Why do our devices wait 20 seconds to alert?

On that note, one of our most frequently asked questions is why our devices wait 20 seconds to sound the cessation of breathing alert. The fact is that babies experience quite normal pauses in breathing. It is usually only after several seconds — more than a minute, usually — that a baby suffers permanent brain damage or cannot be roused.

In 2019, we were thrilled to be invited to partner with The Lullaby Trust, the leading charity in the UK for the awareness and prevention of SIDS. As part of the CONI (Care of New Infant) programme, previously bereaved parents are issued with a Snuza HeroMD before the birth of a new baby.


Our devices give these parents a huge amount of peace of mind, allowing them to get the rest they need, knowing the Snuza HeroMD will alert them in case of problems.


How does the Snuza HeroMD work?

The Snuza HeroMD works in two ways: vibration and an audible alert. The wearable device is clipped to the baby’s nappy with the soft, sensitive, flexible tip resting on their tummy. This allows the device to receive feedback from the baby’s body. The HeroMD is sensitive enough to detect even the slightest, shallowest of breaths, which marks it out from the crowd of movement monitors as a true baby breathing monitor.


As mentioned before, baby breathing can be erratic with little pauses and fluctuations. These are normal and are mostly no cause for concern. However, if left unattended, some of those pauses become a problem. When any human stops breathing, they can lose consciousness within a minute, rendering them hard to rouse.


As such, we have designed our entire range of baby movement and breathing monitors, including the Snuza HeroMD,  to sound an alarm at 20 seconds. Here’s how it works:

As long as the parent or caregiver can respond quickly to the alert — and we make it piercing and loud to elicit a fast response — most babies can be roused within another few seconds. That takes the entirety of the oxygen deprivation to under a minute in most cases, short enough to cause no permanent harm.